Will Stronghold, Layla (formely) and the other sidekicks

Gwen Grayson was born Sue Tenny, probably in the early 1950s. Her early years are unknown.

Sue enrolled in Sky High School in the 1960s, and during Power Placement was placed on the Hero Support track because nobody knew what a Technopath was and her powers were perceived as either strange, frightening, or both. Enraged at the discrimination she suffered owing to the perceived slight being made a sidekick, she formulated a plan to start her own super-villain academy to replace Sky High. In the mix, she was caught smoking in the restroom.

To help with her plan, in the school's Science Club, she created the Pacifier, a weapon that would de-age a person back to being a baby. Sue intended to use the weapon to turn the students and faculty of Sky High into babies and then steal them away. It was probably at this time that Sue created the powered exoskeleton that allowed her to become the super-villain, Royal Pain.

Also at Sky High School during this time was Steve Stronghold and Josie. At one point, Royal Pain and Stitches captured the Commander and his sidekick, Mr. Boy. Just as she was about to pacify both of them, Jetstream intervened and kicked Royal Pain to the ground, disarming her. Stitches handed Royal Pain the gun, and Jetstream hurled towards the air. Royal Pain fired, but her beam hit the Commander's chains, freeing the latter. After a brief struggle, the Commander took Royal Pain's pacifier and destroyed it.

The Commander and Jetstream both thought that Sue disappeared just before graduation, but actually she was hit by the pacifier and turned into a baby. Then she was found by Mr. Grayson who adopted her and gave her the name Gwendolyn Grayson. Now Gwen, having the same intelligence as ever, began plotting her revenge against the Strongholds.

A few years later, Gwen became Student Body President of Sky High, with three cohorts: Lash, Speed and Penny. This was easier because Technopaths were more common than they were two decades ago.

The Beginning of the End

She welcomes the new students, including the Stronghold's son Will Stronghold, who is amongst them. She knows full well that Will is attracted to her, and spent a lot of time with him, even asking him to the School Homecoming dance.

She later devised a plan by bringing a huge party to his house and tricking him into taking her into the Stronghold's super lair, the Secret Sanctum, by subtly hinting that she wished they could be alone. Upon arriving, Gwen said they should begin making their own memories and while they shared a kiss, Speed broke in and stole the Pacifier, which the Commander had kept as a trophy. After being rude to Layla and telling Will that he should hang with her friends instead of his former "losers," Will dumped Gwen as his date to the dance and ended his relationship with her. She fled from the house with the other partygoers when the Commander arrived and blamed Will for initiating the event. Speed proceeded to hand over the Pacifier.

Later at the Dance, Gwen revealed herself to the crowd as arch-villain Royal Pain, which surprised the Commander, as he always thought of Royal Pain being male. Stitches handed her the Pacifier, and with it she turned all the heroes, teachers, and staff into babies, minus a select few that escaped and eventually defeated her minions, though none of the latters' failures were fatal.

Will Stronghold overheard the speech she gave the baby Commander of her past, and apologized to her, thinking that she was talking about her mother, but was shocked to find that she is the same person his parents fought years ago. The two engaged in a fierce battle, with Will emerging victorious after he discovered his powers of flight. With this new discovery, Will tossed her into the air and breaking her armored helmet. Royal Pain tried one last trick by detonating an electric bomb that stopped the school from floating, but Will and his friends saved the school from crashing. Afterwards, Royal Pain and her cohorts were arrested, with the villain begging to be put in solitary confinement (indicating that she may have regained some perspective).

It is unknown if her request was granted, or if she and her friends broke out of jail (this is supported by Penny being allowed to chew gum and the fact that they are together in a completely ordinary cell).

As Gwen, she is a pretty and sweet girl who mostly wears pink, but this is a trick to mask her true face. On one occasion, she was briefly seen in a white T-shirt, and on another, she was wearing a blue tank top.

As Royal Pain, she wears a golden-and-black colored armor with a mask and a cape.

As Sue Tenny, she was a brilliant student who was discriminated for her powers. Her early trials made her very mentally unstable and instilled in her a thirst for revenge.

Despite this, there is evidence that she is genuinely attracted to Will and unlike Warren, she does not blame him for the setbacks caused by his father. She is always very enthusiastic about helping him on his way, acts worried when he is being smashed into a wall by her own cohort Speed, and becomes furious and close to tears when he dumps her, notwithstanding the fact that she already has the Pacifier. She also tells Layla Will wants nothing to do with her, even though she could have just told her Will wasn't interested, implying that it wasn't just part of the plan and she had become very overprotective of her would-be significant other. On the other hand, she has no real sentiment towards the three bullies she has recruited, as she begged to be placed in solitary confinement. Given what she knows about Will, this may imply that while she has been consumed with an obsession with revenge and glory, she seems to have retained some of her sweet side in spite of everything she's endured.

Gwen Grayson is a technopath. This means that she can control technology with her mind. 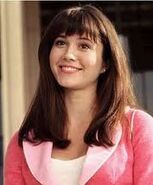 Gwen and her gang in the Detention Room.

Gwen and her gang imprisoned
Add a photo to this gallery
Retrieved from "https://skyhigh.fandom.com/wiki/Gwen_/_Royal_Pain?oldid=6260"
Community content is available under CC-BY-SA unless otherwise noted.