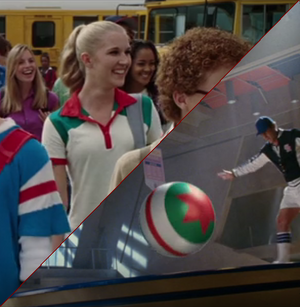 The Cheerleader appeared briefly in at least three scenes. First she appeared with the freshmen leaving Ron Wilson's bus, then during Power Placement, and later in Hero Support class, sitting in the front row.

A new freshman, during Power Placement, she demonstrated the power to shapeshift, turning into a large ball. Coach Boomer categorized her as a sidekick, and derisively kicked the ball off the stage.

Community content is available under CC-BY-SA unless otherwise noted.